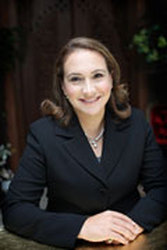 After graduating from Chapman University in 1996, Mrs. Puente worked as an Immigration Inspector with the U.S. Immigration & Naturalization Service (INS) at the Southern land border at Calexico, California. She then transferred to the position of District Adjudications Officer at the Los Angeles District Office of the Citizenship & Immigration Services (CIS). During her tenure with CIS, she conducted interviews for benefits such as United States citizenship and adjustment of status (green cards). Mrs. Puente also served as the director of the Congressional Liaison Unit; a unit specifically designated to respond to immigration related inquiries of members of the House of Representatives and the Senate. Mrs. Puente reached the level of Supervisory District Adjudications Officer. Mrs. Puente completed her law degree at Loyola Law School in Los Angeles, California while working for CIS.

After nine years of service with CIS, Mrs. Puente decided to pursue her lifelong desire to practice law in the private sector. Mrs. Puente was an associate at the prestigious Law Office of Enrique Arevalo from January 2006 until January 2010 when she established the Law Office of Alma D Puente.
Mrs. Puente had the distinction of working as an intern with the United States Supreme Court in Washington D.C. She is fluent in Spanish.